Himeji’s grand, white castle commands the skyline of this small city near Kobe. Earlier this year the castle emerged from several years of renovation which has given its white features even more prominence. The Japanese people have given it the nickname Shirasagi-jo (White Heron Castle) because the main keep with its three smaller towers resembles a White Heron. UNESCO designated the castle a World Heritage site in 1993 due to its beauty, stature, and importance to Japanese history. This is one of Japan’s greatest historical sites to visit, so don’t miss it. In 1333 A.D. the samurai Akamatsu Norimura constructed a fort in the current castle’s location, and completed its first castle before his death in 1346 A.D. For nearly three centuries the castle was added to and re-modeled. Following the significant Battle of Sekigahara in 1600 A.D. it was awarded to Ikeda Terumasa, who in the following year began construction of the castle seen today. Prior to World War II it was declared a National Treasure, and it thankfully survived the destruction of Himeji city in 1945. If you have visited other castles in Japan, the first thing you will notice about Himeji Castle is its size. Its outward appearance looks as though it has five floors, but inside reveals seven. The monument’s exterior is covered in a traditional white plaster made from slake lime, shell ash, hemp fiber, and seaweed. Large wooden pillars rise up to the fifth floor supporting the castle, which over time yielded to its weight and gave it a slight lean. It was not only designed for size and beauty, but also excellent defense capabilities.

Notice the castle’s many layers of defence The entrance is protected with walls that wind back and forth to confuse would-be-intruders. Doorways are reinforced with an inner and outer door. Throughout the walls and castle are 997 holes which offer a protected place to fire on attackers. Four kinds of shapes can be seen which allowed more efficiency to those using bows or guns. In addition to this, visitors can also examine 21 different gates, thickly-latticed windows, 32 mud clay walls, and the aesthetic ornaments (Gegyo) installed at the gable peaks.

How to visit this national treasure

When you get off the train at Himeji station you need only walk out the front door to see this beautiful piece of Japanese history. The castle just emerged this year from a five-year, 2.4 billion JPY (20 million USD) renovation in which it received new roof tiles, plastering, and repair to the damaged floorboards.

The castle opens at 9:00 am and the last call for visitors entering is 4:00 pm. It costs 1,000 JPY (8 USD) to enter. Tourists should be aware that on national holidays the castle is extremely popular and visitors can be expected to wait up to three hours to enter. Normal waiting times are roughly half this. Himeji Castle is Japan’s grandest castle and is extremely easy to access, even if one wishes to stop for the morning and continue their journey in the afternoon. It is worth your time to go. 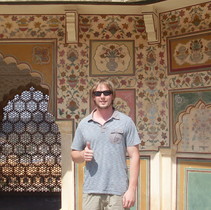 My name is Tyrel and I grew up in Canada. After high school, I took my first journey to Thailand and Australia. That year was the greatest time of my life and I have been traveling the world ever...Read more
Want to contribute as a Local Expert?
Register Here
Hotels
Lowest Price Guarantee

Explore Himeji
Good things are meant to be shared!